I finally get to actually begin posting photos from our trip to Greece in 2005. Two firsts here: these images were shot with my first digital camera, a relatively simple KODAK model Z1015. And, this trip was our first with an organized tour group, as we had always preferred to be on our own. However, sometimes it makes sense to join a tour and do things that might otherwise been inconvenient. So, we signed up to travel with a German group, Studiosis, which was restricted to a small number of islands. My wife speaks fluent German [she grew up in Braunschweig], and I could understand /speak the language enough to get by. After assembling in Athens, we all took a ferry to Naxos. Our first glimpse of the port of Matthiassos Village is below. 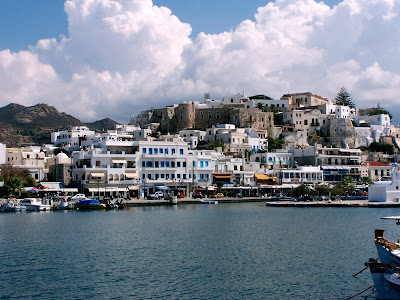 Through some snafu, there were no porters to help transfer our luggage from the ship to the hotel. I remember a long, hot and sweaty trek through the streets. But, once situated, we were ready to head out to see the iconic gate of the Apollo Temple, which we could see from our hotel [below]. 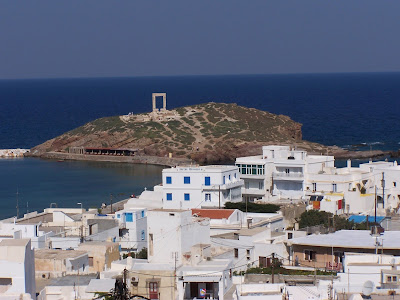 This walk was decidedly easier than the earlier one with our luggage. The marble gate [dating back to ca. 600 BC] is all that remains of the temple [Top].  The middle image shows the route we took to reach the gate. The bottom image was taken as sunset approached. 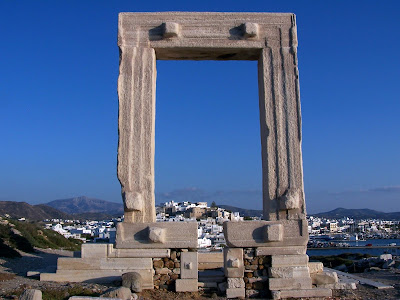 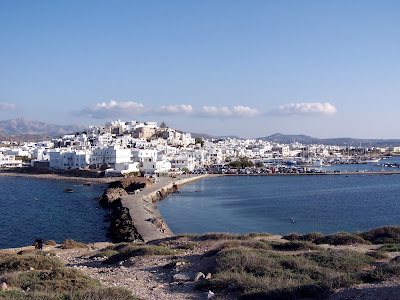 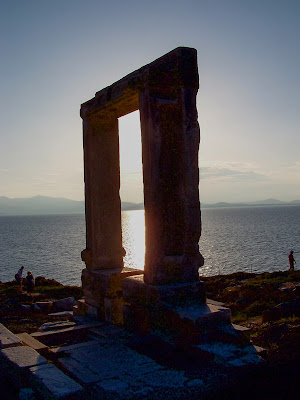 We remained on Naxos for four nights, using it as our base pf operations to explore Naxos itself, as well as several other islands. The last two images were shot on Naxos. I don’t remember anything about the towers below [except that the one on the left is solid marble], nor where we were in this rugged landscape. 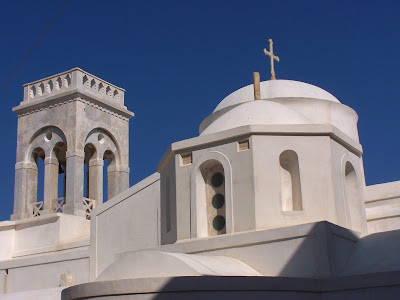 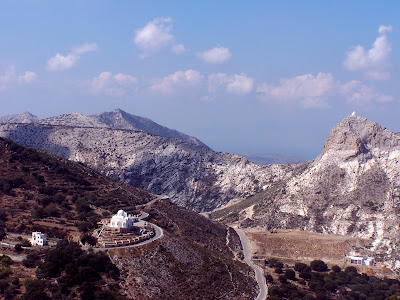 One of the islands that we did on a day trip was Delos. It is renowned for its history/ruins. The row of iconic lions is grand, but, theyare not the originals. Those are safely housed in a museum, which I did not know that until much later. 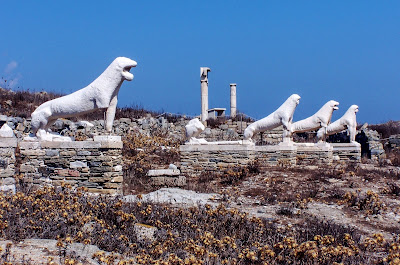 In my last posting three weeks ago, I indicated that I would resume with shots from a tour we took to Greece in 2005.  Actually, our first trip there dates back to 1966, when we drove in a VW Beetle  from Munich, Germany through Italy and Yugoslavia all over Greece. Back then, I was shooting Kodachrome 2x2 slides, and storing them in plastic Vis File pages. This proved to be a bad idea, since after several decades in loose leaf binders, they managed to accumulate specks of dust and dirt [which are obvious in the top two images]. I discovered that when I decided to put them through a digital scanner. It was quite a chore trying to remove the spots pre-scanning and post editing.  Having said that, I will delay again posting the 2005 shots and show you some 'ancient' images from this earlier trip.
Our first stop was in northern Greece in Meteora where monasteries were built atop giant sandstone pillars, starting in the 9th century A.D. To quote Wikipedia: “Access to the monasteries was originally (and deliberately) difficult, requiring either long ladders lashed together or large nets used to haul up both goods and people. This required quite a leap of faith – the ropes were replaced, so the story goes, only "when the Lord let them break". Until the 17th century, the primary means of conveying goods and people up and down was by means of baskets and ropes. Below are two shots that give some sense of the scale of these constructs. 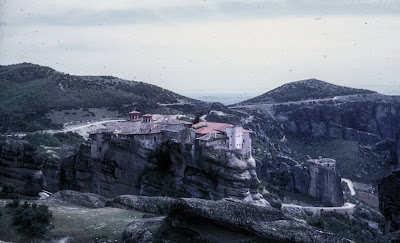 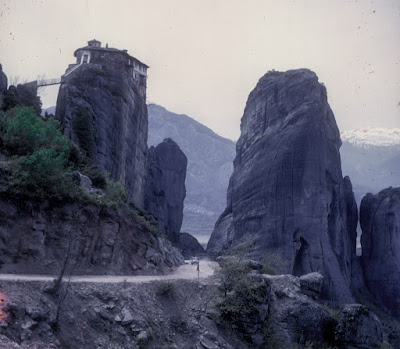 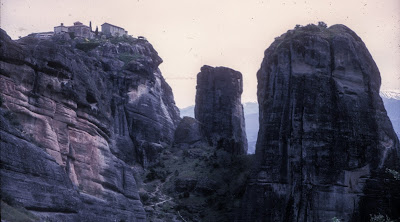 Leaving Meteora, we headed south to Delphi, home of the Oracle of Apollo. The remains of a temple, an amphitheater, and several other structures are built into the mountainside. We happened to arrive during the filming of what appeared to be some religious rite in the temple [below]. 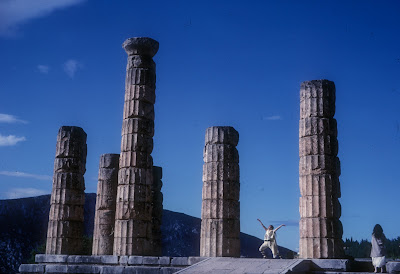 As the sun was going down, the light was magical. The shots below were taken higher up from the theater. 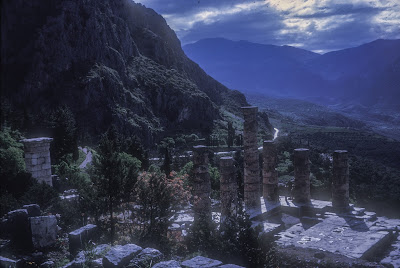 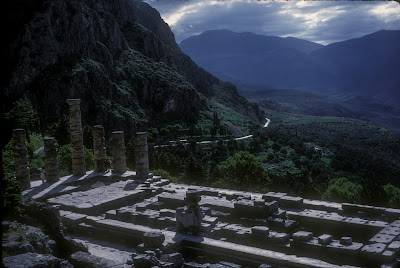 The last shot was taken in the harbor area of a place I do not recall. I found it fascinating how the fishermen worked together as a team mending their nets. 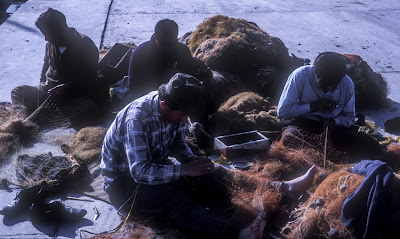 Posted by Photos by Stan at 4:03 PM No comments:

In my last posting three weeks ago, I indicated that I would resume with shots from a trip we took to Greece in 2005. After returning from vacationing in Aruba, to the bitter cold of Rochester, NY, I have reconsidered. I think that looking at images of sun, sand and sea is what I need to do at this time; so, Greece can wait another week. [NOTE: Somewhere buried in my blog archives are other shots from Aruba, an island we have been visiting for more than 20 years. I apologize if any of the images below bear any similarity to earlier images. Having said that, here are my newest (cell phone) shots.] Immediately below is a pair of the famous Divi trees; they have been bent in the direction that the trade wind blows. 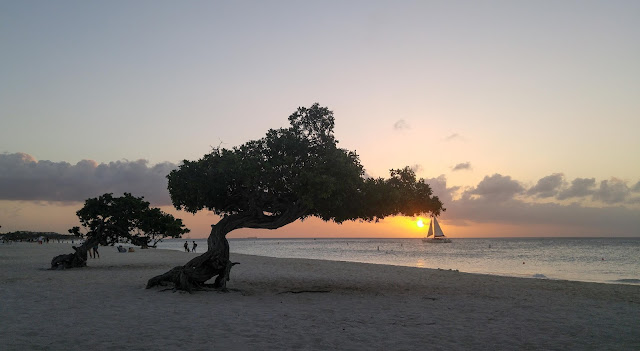 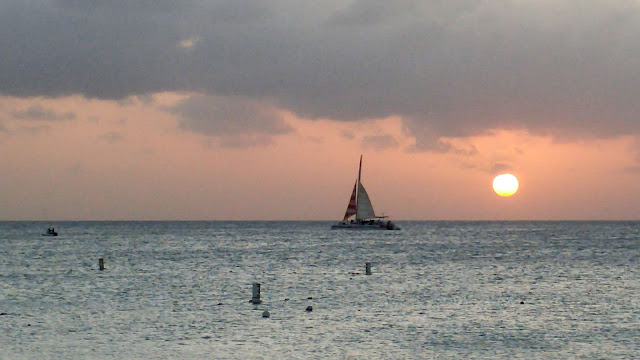 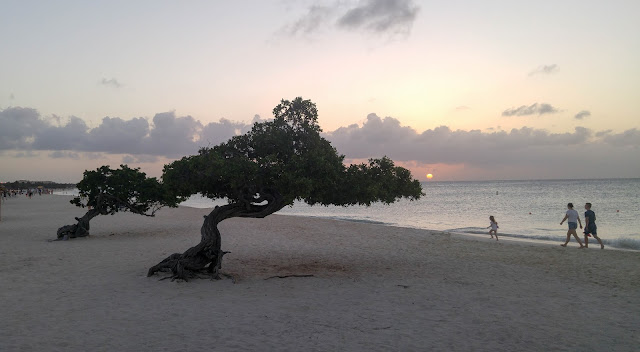 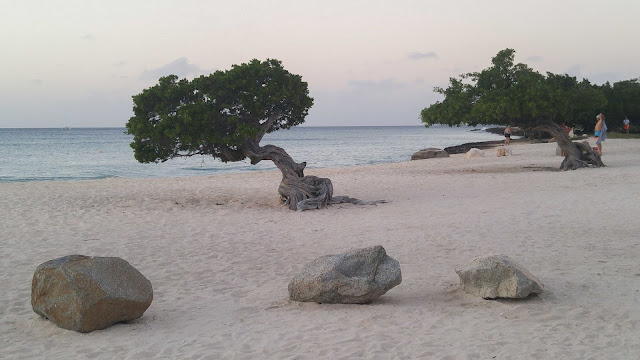 Here is a portion portion of Eagle Beach, Judged by Trip Advisor to be #3 among the top beaches world-wide. 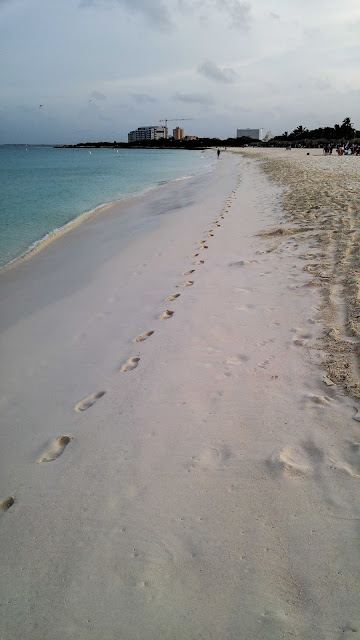 Posted by Photos by Stan at 5:58 PM No comments: